A reverse folding umbrella with its own luminous effect

A reverse folding umbrella with its own luminous effect

With the continuous development of science and technology in this world, it will be accompanied by the birth of numerous technological inventions and creations. The imagination of the human brain is unlimited. After transformation and technological upgrading, something will become a new type of product.

Often small changes can bring big changes. This new type of reverse folding umbrella has the same appearance as traditional umbrellas, and the direction of opening and closing is completely opposite to that of traditional umbrellas. The principle of opening is like a flower blooming. Maybe this looks a little strange, but it is this special design that solves many problems that everyone encounters when closing the umbrella.

On the basis of the original ordinary reverse folding umbrella, this umbrella has been upgraded again, adding a flashlight, and caring for everyone’s night travel

With this umbrella, when you get in the car on a rainy day, it becomes extremely simple to hide in the car and then close the umbrella.

It's no longer the same as holding an ordinary umbrella, you can only quickly retract the umbrella first, and then enter the car, even if you move fast, you still have to shower.

When you enter the car, the wet umbrella seems to be inappropriate. If you accidentally put it away, it is very likely to get important things wet. With this umbrella, go into the car, close the umbrella, and put it in the car without getting wet everywhere.

I described this umbrella as so easy to use. In addition to its reverse design, what else attracts everyone's attention? ONE. Fluorescent strip design: In addition to its aesthetics, the fluorescent design has a reflective effect at night, emits low light, and indicates the position. In the dark rainy night, it can let the car see the passerby walking in front of it, which not only protects itself, but also Protected others

TWO. Flashlight design: equipped with a flashlight at the tail of the umbrella handle, a 360° rotatable LED illuminator, combined with a reflective strip design, plays a double alert role, reminding passing vehicles to stay away from danger. At the same time, it also plays a role of escort. Many people often have very unclear vision in the dark, especially on rainy nights. It is harder to see the road. Sometimes there are manhole covers or obstructions on the road. Everyone does not pay attention. It is easy to fall. This umbrella, when the flashlight is turned on, is instantly brighter and clearer 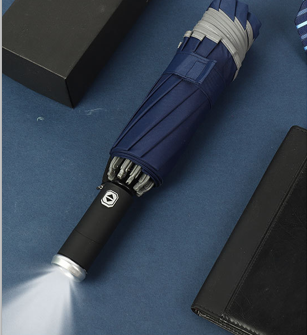 THREE.Double-layer umbrella cloth: In order to create a place different from other umbrellas, we insist on using 210T impact cloth. High-density blasting cloth, with strong light blocking, insulation and heat insulation performance, zero light transmission, can block more than 95% of ultraviolet rays, is very wear-resistant, and has a long service life.

The advantage of the double-layer umbrella is that part of its two layers are overlapped, which is windproof and due to the area of the umbrella. Large, the diameter under the umbrella reaches 105CM. When there is a strong wind, the wind will go out of the gap, so that it will not damage the umbrella. At the same time, it has good waterproof and sunscreen performance and is durable.

FOUR.Reverse folding: the three-fold series umbrella, combined with a semi-automatic opening method and LED flashlight design , can retract the umbrella with one button, and the wet side will be stored inside, and the dry side of the umbrella will be outside, reducing the area of wet clothing, which is impossible It is said that it will not get wet at all, but it can only be said to be reduced in a large area to reduce the degree of wetness. And it is easy to open and close in crowds. Because the opening of the umbrella faces upwards, it can avoid poking people around without having to raise it specially. 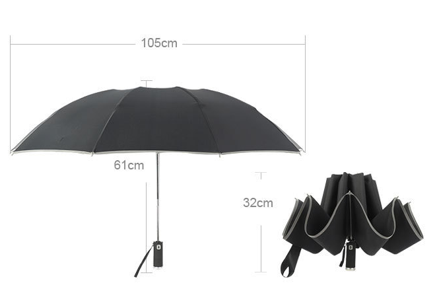 In general, such a reverse-folding umbrella combines many advantages. Even in windy and heavy weather, the umbrella is made of fiber ribs, which makes the umbrella lightweight and wind-resistant. Unfortunately, it does not matter if it is blown out of shape, and it is easy. With one click, it can be restored to its original state immediately.